With permission from the CooKnFish Chronicles by Mark Bellotte

It was a chilly January morning with temperatures starting out in the low 50s. The forecast for the day did not look promising to get much warmer. In fact, conditions were predicted to deteriorate as the day went on. That didn’t stop 42 of the 48 participants that signed up from coming out to the event. This is the story of one of those crazy kayakers that ventured out on a day that nobody else would dare go out. Although there was a search for a missing kayaker out of Macdill Saturday afternoon, this experienced bunch watched out for each other and made sure all were accounted for.

The day started with signing in along side of the road leading out to Fort Desoto. It was 6:15 in the morning; the sun and the wind would not make their presence felt for at least another hour. Each of the competitors was issued a number and a corresponding token that must appear in the photo of each fish being submitted. The format was changed a bit for this leg of the tournament trail. The “Slam” format consists of an aggregate of your largest snook, redfish and trout. The tournament director, Todd Llewellyn, made the decision to include flounder as a wild card because of the cold water temperatures and the devastation the snook population has taken over the past year. After receiving my token, I was off to the launch site.

The official launch time was 7am. I took my time loading the kayak with my gear and getting everything 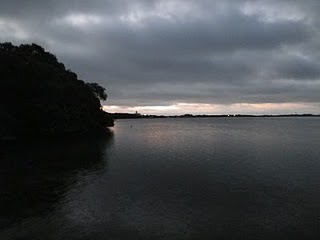 situated the way that I like it. By the time I was finished it was almost time to set afloat. I spent the last couple of minutes double checking to make sure I had everything. I picked a launch site that few people know about, much less use. I looked down the street to see a line of trucks pulling off at a launch on the other side of the street. No doubt they are launching there to hide from the impending gale force winds. My launch choice is closer to the fishing holes that I expected a few paddlers to head to but I would be there first having launched considerably closer. The wind was light at launch time which was perfect on the way out. I planned on having the stronger wind blow me back to the launch.

By 7:15 I arrived at the edge of a depression surrounded by shallow grass bed. I placed the anchor and adjusted the lines. On the very first cast the line went tight and the rod bent in an arc. I quickly landed a healthy 18” trout! As some 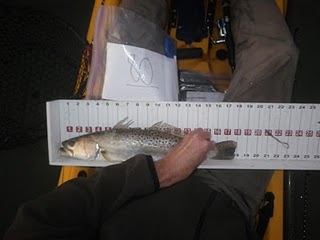 would take this as a sign of a great start, this could also be a bad omen. The rest of the day could not go so well, could it?

Todd and Mark showed up at the same area shortly after snapping a picture of my catch and releasing it back into the hole. I told them of my catch and we all started fanning the area to see

what else we could stir up. About an hour later I caught another smaller trout and a small 14.5” redfish. I was two thirds into my slam before 9 o’clock. I thought to myself that if I could just finish getting the slam I could then work on upgrading the lengths. There was another area that I thought I could get an easy flounder and bigger redfish but it would require loading the kayak back on the truck and relaunching. It was only 9 o’clock and the cutoff to weigh in was 2:45. I had plenty of time so I gave my farewells to Mark & Todd.

The second launch was a good distance from the hole I wanted to fish because the launch site closer to the hole would have required dragging the kayak across a huge muddy flat. Also, the hole was down wind from the launch. The wind still was not too strong that it would make paddling back impossible. I could use the shoreline for some protection. As I started drifting and fishing my way back to the desired location I noticed my kayak leaning and picking up speed. The wind started pushing so hard that I had to shift my weight for ballast. “This is not good!” I steered the bow into the wind to test the difficulty of paddling into this stronger headwind. No can do… I needed a new plan and fast! I paddled crosswind and reached the shoreline that offered some protection from the now 20 knot winds. As I tucked in close to the mangroves to contemplate my next move I got close and personal with some of the local wildlife; a Yellow-crown Night Heron and Little Blue 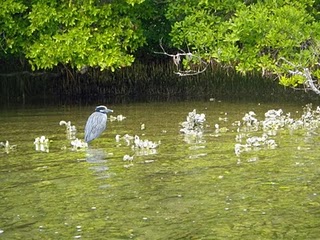 were hanging out on an oyster bar.There was another hole to the north that I found flounder in a few weeks ago but would they be there on a day like today? If I continue on with the original plan, would I be able to get back? I elected to play it safe and used the shoreline to make the paddle back to the north of my launch. There I spent the next 4 hours casting.

I got out of the kayak and waded the edge of the hole hoping that a slight movement to one side or the other would locate fish that were just out of the strike zone from the cast before it. I found plenty of small trout but I really needed a flounder if I was to make a run at placing in the tournament. I checked the time and it was already 1:30. At this point it didn’t matter if I showed up late because I did not feel I was in contention with a 18” trout and 14” redfish on the camera. A couple more casts and I felt another bite and a thrashing head shake. “Another dink trout” I thought to myself. But the fish didn’t surface like most trout do. In fact, the fish was diving, holding the bottom. This has got to be my flounder! In one fluid movement I lifted the rod tip and flipped the fish into the kayak. It is a flounder; a whopping 9 inches of flatness! It wasn’t a doormat but it rounded out the slam. I figured that if I had this much trouble finding this one little fish I might have a chance that everyone had the same problem. Coupled with the crappy weather conditions, I was sure that most of my competitors would have given up a long time ago.

I snapped a quick picture and jumped back in the boat to head back to the launch. I used the wind at my back and the cresting waves to surf back in record time. I still have an hour to get to the weigh-in and the festivities were not very far away. I leisurely loaded my kayak and got out of my fishing waders. When I walked into the tiki bar, the tournament staff informed me that I only had one minute to spare. Talk about pushing it to the last minute!

Tournament staff viewed all the pictures 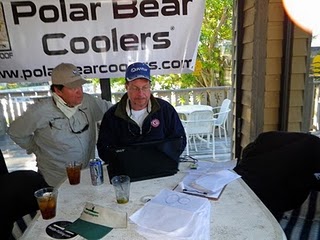 and the list of winners was announced. There were only three slams turned in. Although it was the smallest, it was well worth braving the conditions and pushing the time limits to bring in a 3rd place finish.

Todd, Mark and Rik put on another great tournament and we all caught a lot of fish despite the crumby conditions. Forty-two anglers braved the elements and in the end we all ate, drank and some of us stopped for Advil on the way home. 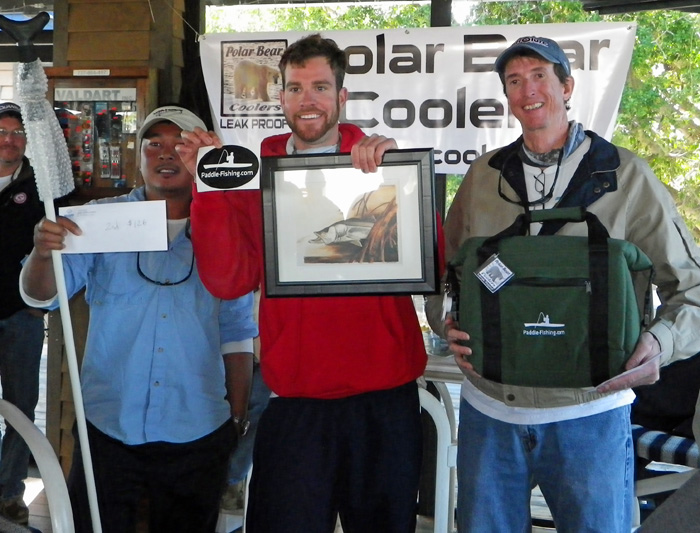 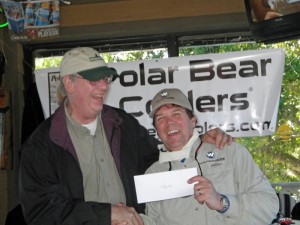 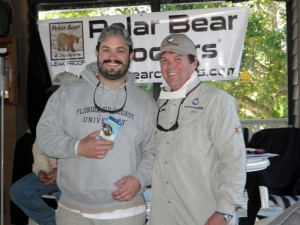 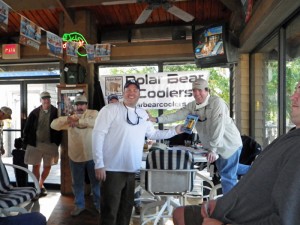 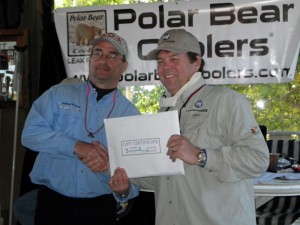 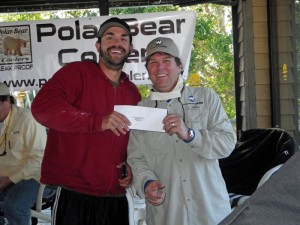 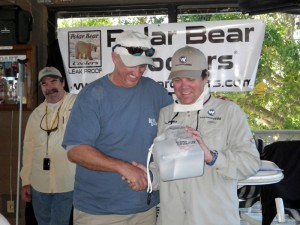 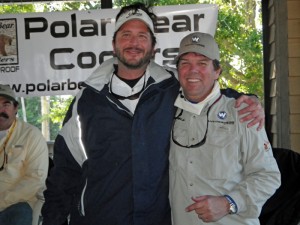 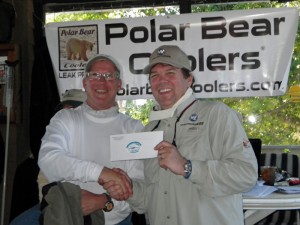 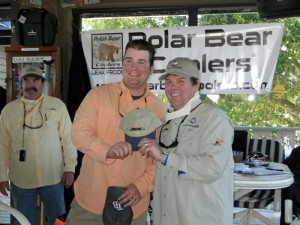 Special thanks to the guys from the website and the sponsors for putting together one of the most fun and interesting tournament series anywhere. 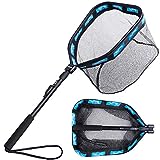 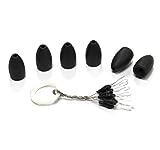 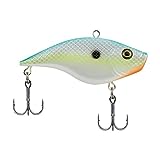